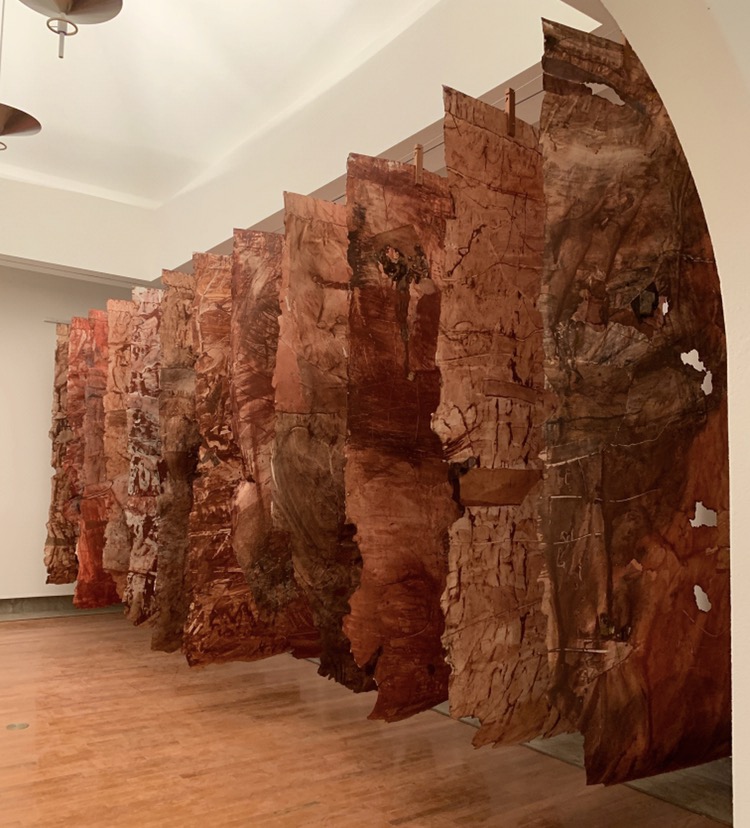 Puerto Rican culture is filled with remarkably creative individuals who are committed to art and enhancing its visibility for audiences around the world. Despite the challenges of the pandemic and recent, severe storms and earthquakes, many Puerto Ricans have taken action to promote and share their vibrant arts and culture with the world. In celebration of National Craft Month, we are excited to share the work of seven extraordinary people in this latest installment of our blog. They include five contemporary artists, one curator, and one artisan.

Jaime Suárez is an accomplished ceramic artist and is considered one of the driving forces behind the development of contemporary ceramics in Puerto Rico. He is the co-founder of a number of ceramic artist cooperatives, including Casa Candina, which was instrumental in establishing the ceramic medium as one of the principal artistic movements on the island. Suárez has exhibited his work internationally and received numerous prizes in international ceramic exhibitions. In addition, his work is included in prestigious international collections. Suárez is also recognized for his leadership and collaborations with cultural institutions on the island. As a member of the CERF+ board, Suárez reflects, “I feel both honored to have the opportunity to serve as Board member and grateful, not only for the help you are giving in Puerto Rico, but also for giving Puerto Rico, through me, a voice at CERF +.”

Toni Hambleton was born in Mexico in 1934 and has been a resident of Puerto Rico since 1963. She has a BA in Fashion Design and studied ceramics with Jaime Suárez. Hambleton co-founded Casa Candina with Susana Espinosa, Bernardo Hogan, and Jaime Suárez in 1980. Casa Candina was a ceramic school and gallery where she was Co-Director and on the faculty until its closing in 1992. Casa Candina cultivated ceramic arts in Puerto Rico, and visitors came from as far away as Europe. Hambleton creates sculptural works that reference the passage of time. She has received prestigious international awards for her work. Hambleton states, “For me, clay is a sensual material, plastic and with endless possibilities that bring me to explore it further as to its form, but without altering the quality of the clay; giving it life through textures. I try to express my personal relationship with nature.” Clay provides a way for Hambleton to communicate. “With clay, you can get mad at it and drop it. And, wonderful forms can come out of that rage. I hope to die with clay in my hands.”

Dahra Rivera is a sculptor, installation artist, draftswoman, and ceramicist. Rivera works primarily in ceramics and textiles and considers herself an ecological and multimedia artist. She studied in both Puerto Rico and the United States, receiving her master’s degree in sculpture at Hunter College in NYC. Rivera has received several awards and honors, including the Casa Candina Prize and a grant from the Joan Mitchell Foundation.

Rivera’s work investigates our complex relationship with the natural world. Her work includes displays and assemblages of disparate materials, from ceramics, metal, glass, and fibers. Her artwork brings attention to the imbalances that threaten Puerto Rico’s environment and focuses on animal-human relationships, as in Los Sueños de Maria Sybila II and Nido pictured here. She also examines water issues, as expressed in her installation Pterocarpus Officianalis, an aquatic installation of small clay trees enclosed within clear spheres. 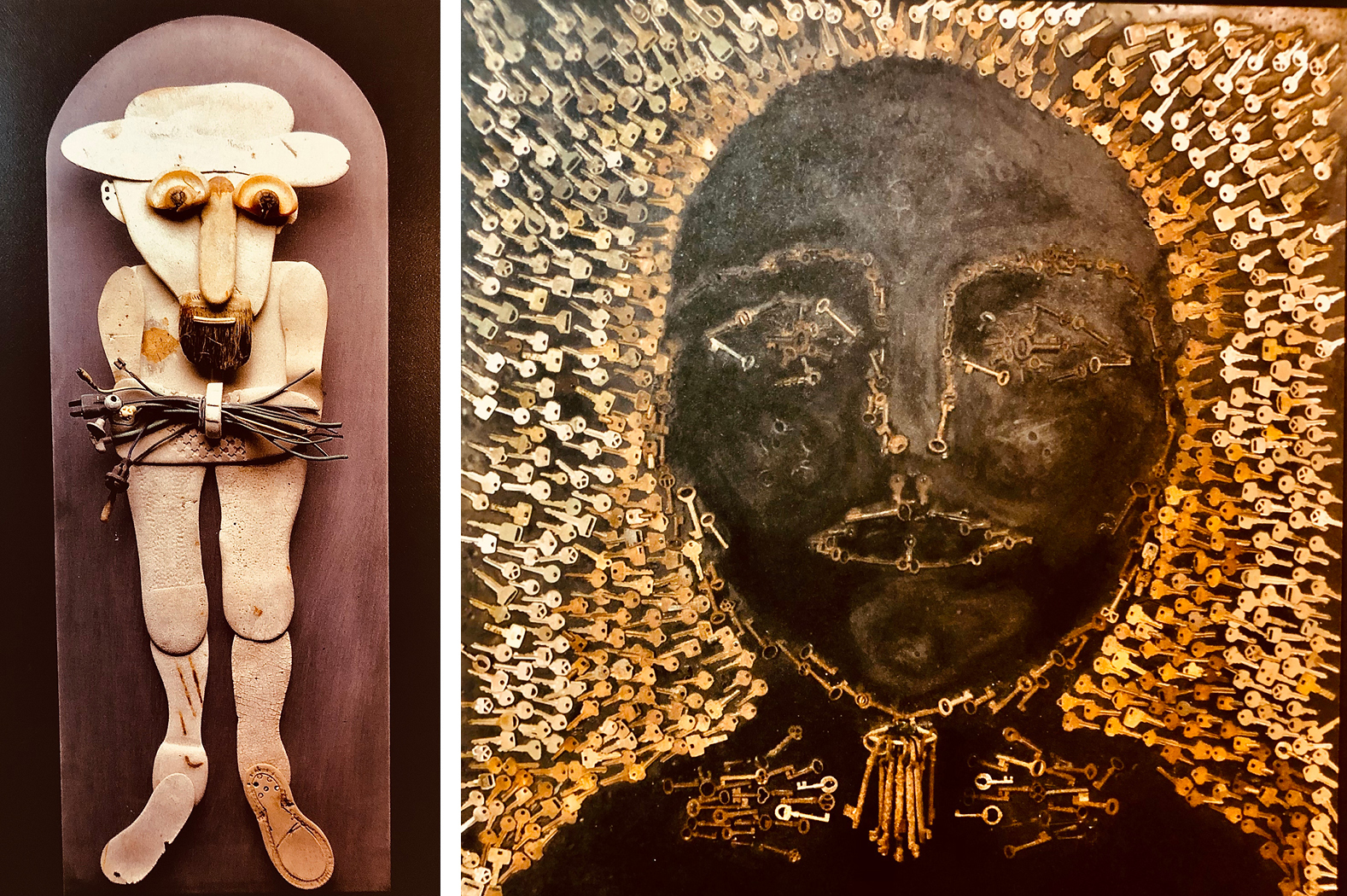 Nick Quijano is an assemblage artist, painter, printmaker, and designer. He was born to Puerto Rican parents and spent his early childhood in the South Bronx. Living in New York granted him an early appreciation for art as he experienced Leonardo da Vinci’s Mona Lisa and Michelangelo’s Pieta at the World’s Fair as a young boy. He recalls being introduced to art making in a supportive environment in elementary school. Quijano moved to Puerto Rico permanently at age 13, and his early memories of life in Puerto Rico would later inspire his art. Quijano studied architecture and printmaking at the University of Puerto Rico. He later taught at the Art Students League in San Juan. Quijano holds a degree in architecture and a bachelor’s degree in environmental design from the University of Puerto Rico School of Architecture.

Quijano is a prolific painter, and his work was recently included in an online exhibition at Fort Gansevoort New York. Similar to his paintings, his assemblages and paintings portray his childhood memories of Puerto Rican life. For example, in Vendedor de Flores, Quijano uses old and found shoe soles to create his image of a flower vendor. 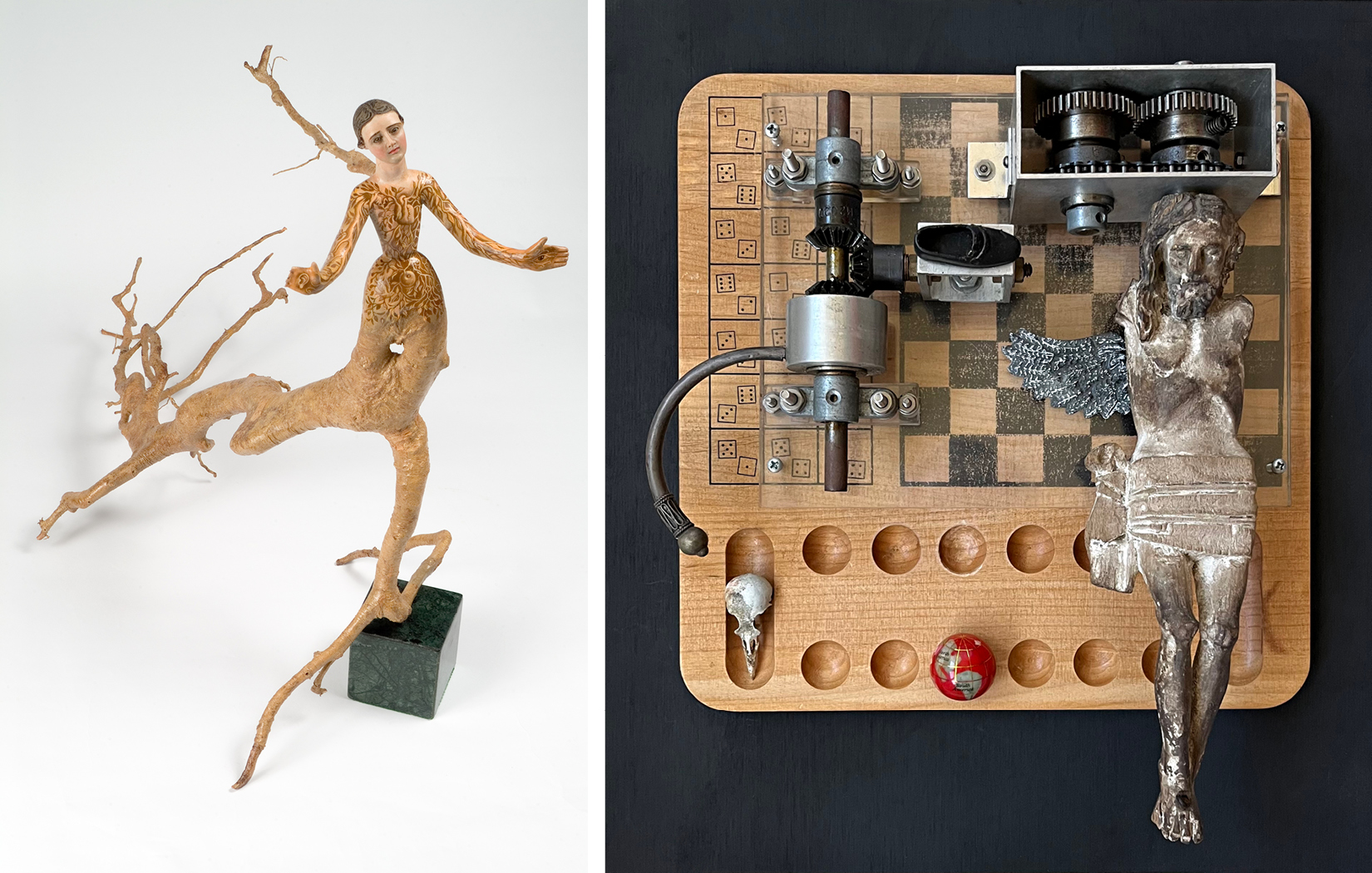 Rafael Trelles is a painter, printmaker, installation artist, and stage and costume designer. He studied painting under Julio Yort and completed his bachelor’s degree at the University of Puerto Rico. In 1983, he began his graduate studies at the Escuela Nacional de Artes Plásticas (Academia San Carlos) in Mexico City and returned to Puerto Rico in 1986. He cofounded the art group El Alfil (Image and Word). His work references mythology, world literature, and Surrealist, Max Ernst. 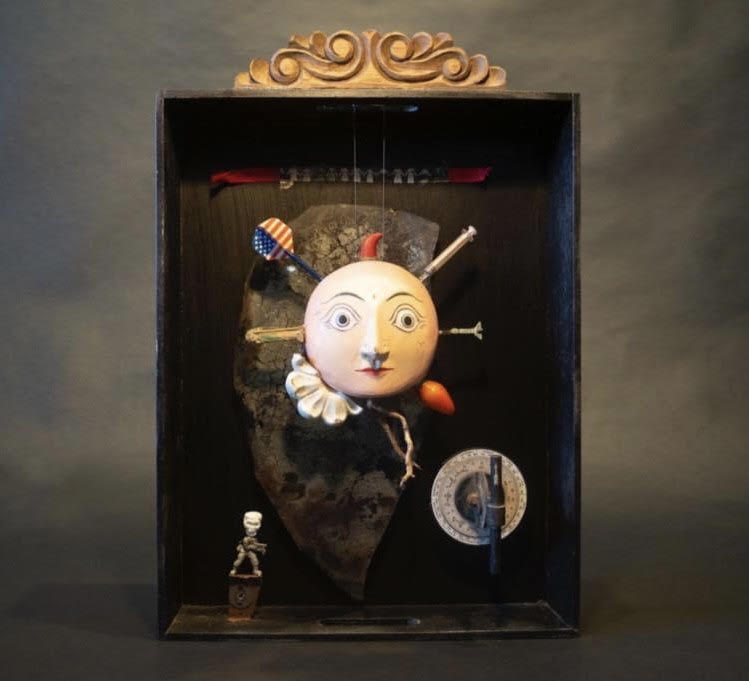 “Fable of the New Millennium is an assemblage of found objects that I made in September 2019. The meaning of the piece was not clear to me until months later with the emergence of the COVID 19 pandemic. What was initially the face of a sun taken from a broken handicraft from Indonesia, became the very representation of the virus and its social and political context.” – Rafael Trelles 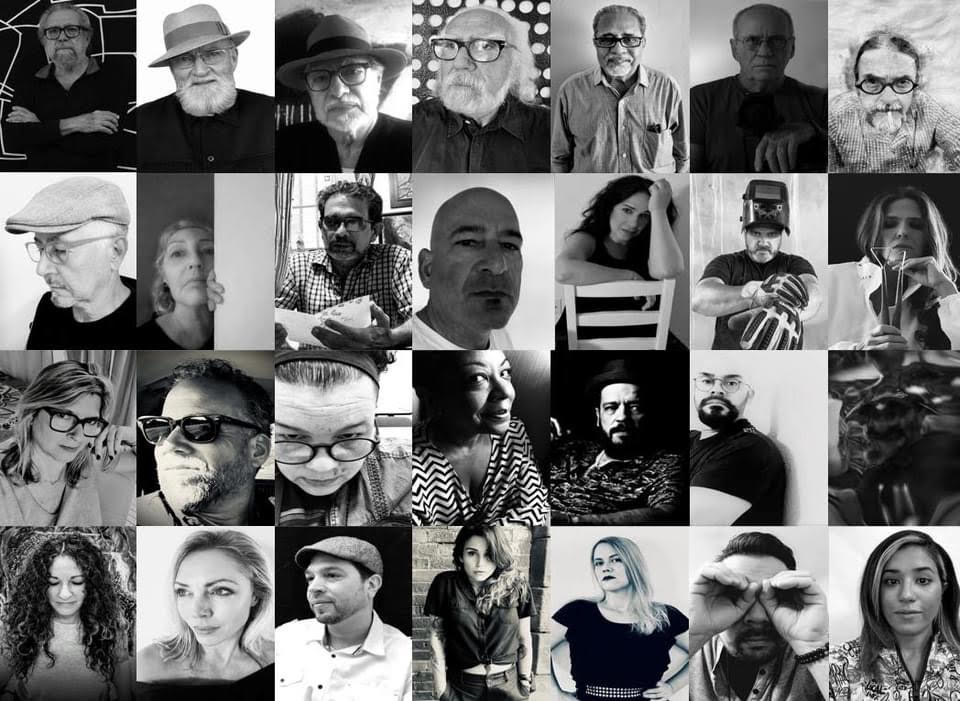 Some of the artists featured in Art in Times of Pandemic. Photo courtesy of John Rivera-Irizarry

John Rivera-Irizarry, Director and Curator of All About Art and Art in Times of Pandemic

When the pandemic struck, it created challenges across Puerto Rican society, but especially impacted the arts community. John Rivera-Irizarry created the virtual exhibition in Facebook, All About Art, in 2020 to promote the Puerto Rican art scene, and its audience has grown to 10,000 followers from around the world. “We wanted to explore the parallelisms and repercussions of this pandemic, in real time, and in a more social, political and cultural context through the artists’ perspectives,” said Rivera-Irizarry. That is how the exhibition, Art in Times of Pandemic El Arte in Tiempos de Pandemia, began. Irizarry is the director and curator of this exhibition, which includes two iterations; each encompass the work of 28 artists whose work includes painting, sculpture, ceramics, photography, and installations. The artists, Jaime Suárez, Toni Hambleton, Dahra Rivera, Nick Quijano, and Rafael Trelles, featured in this blog post are also included in Art in Times of Pandemic. A third iteration featuring additional artists is currently underway. 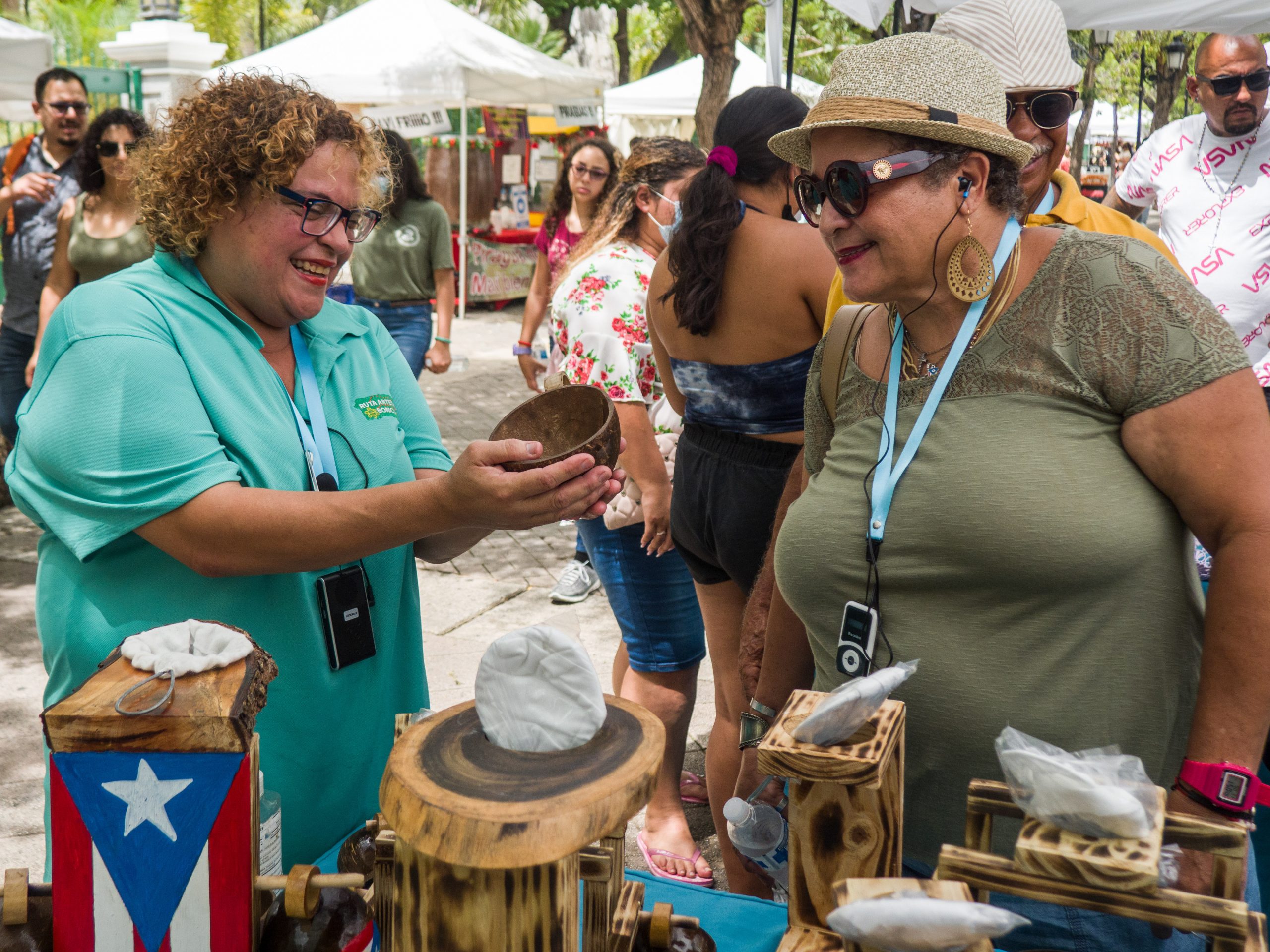 Johanna Rocio del Mar Flores Perez is the coordinator of the Ruta Artesenal Boricua (Boricua Craft Route), a non-profit organization aimed at bringing together Puerto Rican artists and promoting their work, while educating the public about the traditional processes and materials. Currently, Ruta Artesenal Boricua is based in the Old San Juan area, but Rocio del Mar Flores Perez hopes to expand to other municipalities. She believes that craft in Puerto Rico should be considered a serious industry, just as it is in many South American countries. Rocio del Mar Flores Perez is also an artisan who collects sands of different colors and mineralogical compositions from across the island, which she uses to create small sculptures. She received a 2019 Get Ready Grant, a 2019 Emergency Grant following Hurricane Maria, and a 2021 COVID-19 Relief Grant. As a former CERF+ beneficiary, she is an important part of our community.

Special thanks to Jaime Suárez, Toni Hambleton, and John Rivera-Irizarry for the invaluable information they provided for this blog post.