Reflection on Recovery – An Interview with Kevin Pourier 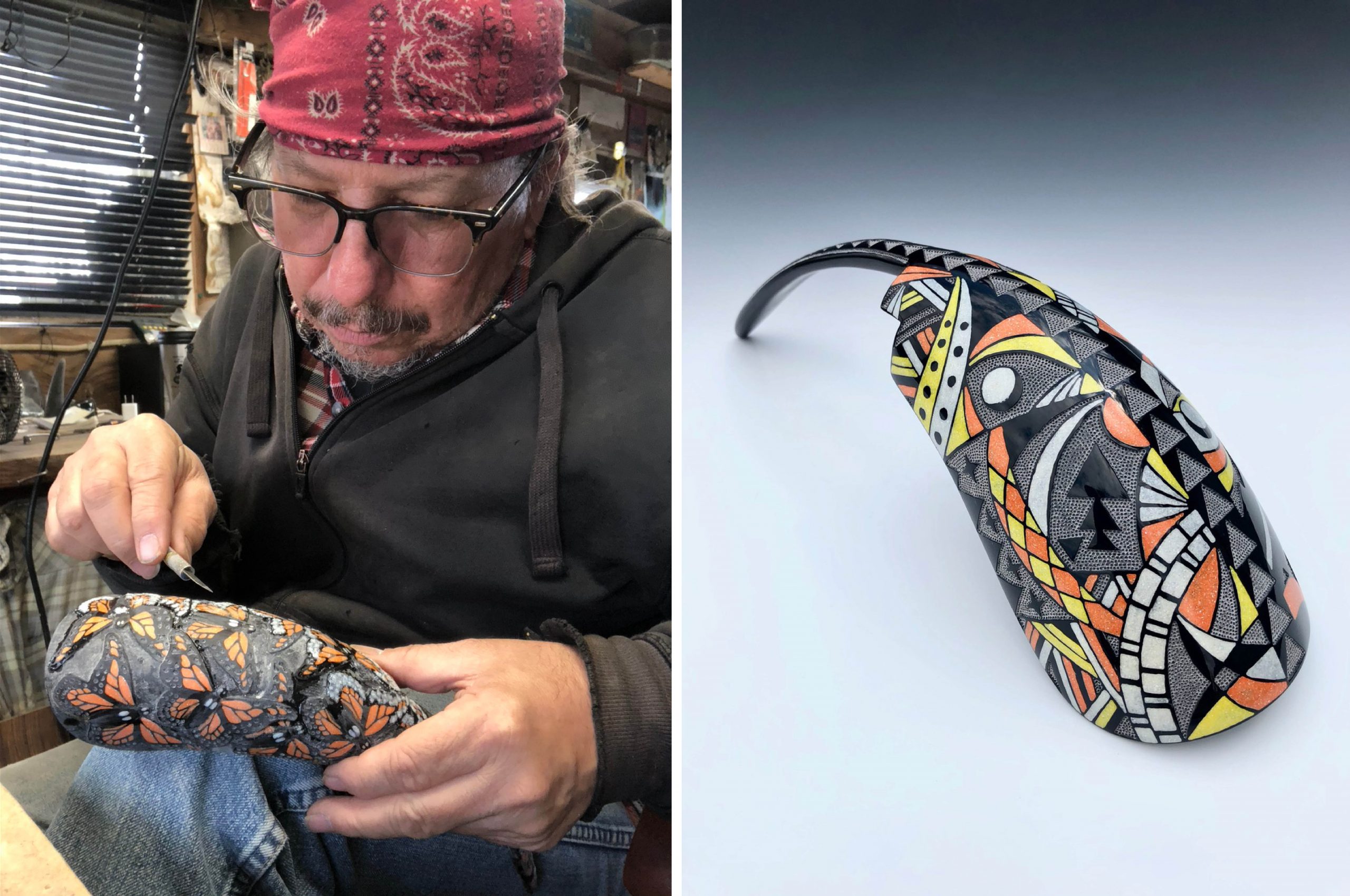 We first heard from South Dakota-based Oglala Lakota artists Kevin and Valerie Pourier in 2013, after a fallen tree damaged the roof of their studio and ruined their tools, flooring, and other materials. The tree was knocked down during one of the largest blizzards ever recorded in the region, and the Pouriers put the funds they received toward a new roof.

Kevin and Valerie work collaboratively and are well known for creating wearable sculptural forms like belts, necklaces, and earrings from buffalo horn that is shaped, carved, and inlaid with semiprecious minerals. They also create contemporary buffalo horn spoons and cups in the traditional manner. Their work has received many awards, most recently Best of Show at the 2018 Santa Fe Indian Market,

CERF+ recently had the opportunity to catch up with Kevin to learn more about their recovery and find out what they’ve been doing since their emergency.

The 2013 blizzard that destroyed the roof of your studio was the worst storm recorded in the region at that time. Were you prepared for a storm of that magnitude?

No one was prepared for that storm! The blizzard that tore my roof off hit in early October. All the trees still had leaves on them! The storm killed over ten thousand head of cattle and many horses. It took the ranchers years to rebuild their herds. We still have trees in our yard that need to be cut down and hauled away. The roof in my studio took a direct hit from a hundred-year-old cottonwood branch. Many of our tools were ruined by the snow and water that came through the roof after the storm. I contacted CERF+, and with their help, I had my roof replaced within the month. It saved my business because I was able to keep on making my art and make it to my next show.

Have you experienced any similar extreme weather events since 2013?

We have had some intense hailstorms. We even had some extreme rain that caused major flooding to come out of the sandhills we live in! I’ve never seen anything like it. Then, a few years ago, a lightning storm came by and started a fire. Our 4×4 Blazer was burned to a crisp, and half of my father’s land was burned.

What did you learn from these incidents? Have you made any changes to your studio or practice as a result?

Living on the Northern Plains, we get extreme weather. We endure these events and have for many generations. I am the third generation of my family to live on this same land. We help each other here and get by. We do have a generator now for the one or two power outages we have every winter. We pay attention to the weather, as all people do in this area. It could mean life or death in many cases. We always have enough fuel for the furnace, wood for our studio, and food in our cupboards. Things happen! We deal with things here in the Northern Plains. We are survivors. Many times there is just no avoiding the things that are coming. I am like the buffalo. I put my head down and go into the storm headfirst.

What are you working on right now?

Right now, I am preparing for the Heard Museum Guild Indian Fair and Market, which takes place from March 6–8 in Phoenix, Arizona. After that, I will be headed to Santa Fe, New Mexico, where I’ll be the artist-in-residence at the Institute of American Indian Arts (IAIA) from March 20 to April 29. I always wanted to attend art school when I was younger, but by the time I got full time into making art, I couldn’t afford to take time off to go to school and have no income, so it’s just something I never did. This is a dream come true for me and my wife, Valerie.

During the six-week residency, I will have the opportunity to work with IAIA students, staff, faculty, and the Santa Fe Arts community in workshops, demonstrations, classroom visits, critique sessions, and other events. I will also be working in the foundry at the IAIA, which I am very excited to start! I will be experimenting and incorporating some of my designs and ideas into bronze and glass. I will also be doing some demonstrations and talks at the King Gallery in Santa Fe, New Mexico. The King Gallery represents my work in Santa Fe, New Mexico, and Scottsdale, Arizona.