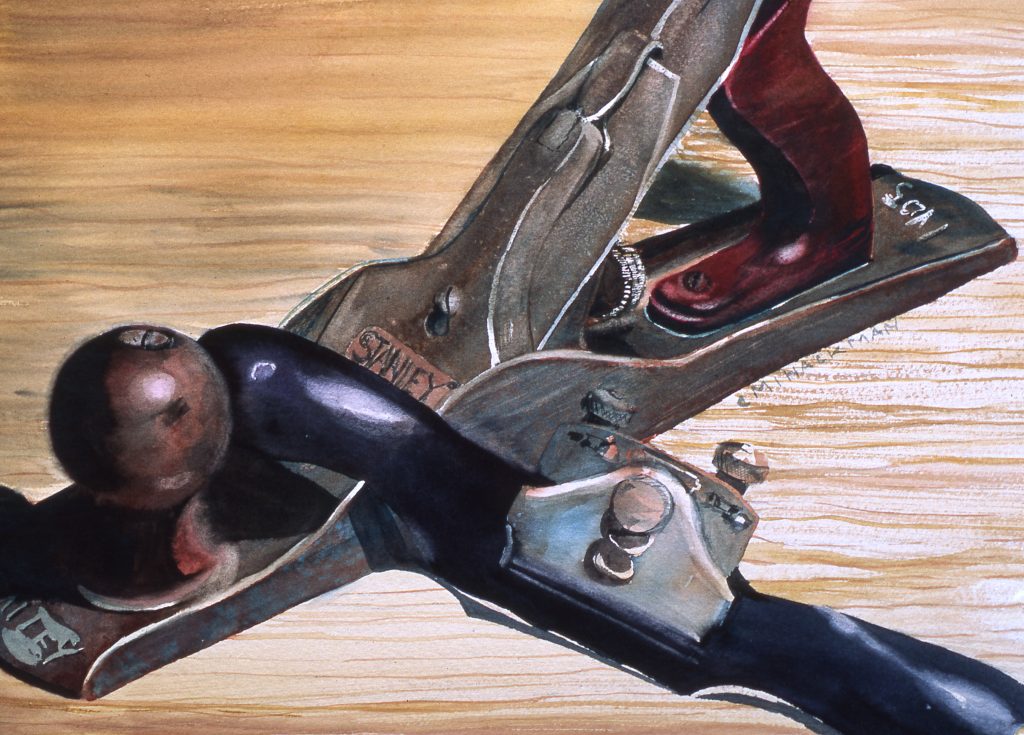 My painting suite, the Keepsake Series, grew from my love of utilitarian objects. I am a maker, and I come from a family of makers. One of us is always painting, potting, woodworking, tailoring, machining metal, and so on. Tools and their ability to create fascinate me. There is great beauty in the humble tools depicted in my paintings. These items have served generations, and I feel privileged to have them in my possession. This is the story about the lasting legacy of a collection of woodworking tools and their journey through five generations of my family. 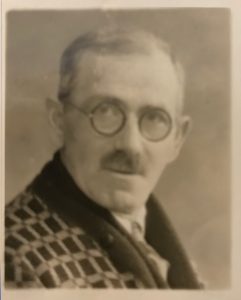 My great-grandfather, Nathan Katz, arrived in the United States by way of Ellis Island sometime during the early 1900s.  For the remainder of his life, he shared a home with wife, Yetta; his daughter, Bessie; son-in-law, Joseph; and grandchildren, Hannah and Martin (my father), in Red Bank, New Jersey. Nathan worked as a carpenter: building, refinishing, and repairing furniture. I never knew him, but he left a storied legacy and a collection of woodworking tools that have been passed down through my family.

My father often spoke fondly of growing up in the same house with his grandparents, Nathan and Yetta. Nathan was quick to anger, but quick to forgive. On Friday evenings, he would soak in the bathtub and then offer up his calloused hands for my father to remove the splinters from the week’s work. After he passed away, Nathan’s tools were boxed up and stored in an old wooden cabinet in the basement. When Nathan’s son-in-law, Joseph (my grandfather), passed away, my father, Martin, inherited the large collection of woodworking tools.

Many of the tools occupied a place of honor over Martin’s workbench, mounted on a pegboard replete with black marker outlines that insured that each item would be returned to the correct location. Although his three daughters, Naomi, Nan, and I, expressed an interest in learning to use the tools, he put us off. We think he may have been hoping for a son. He finally permitted his youngest daughter, Naomi, to watch him working on projects. 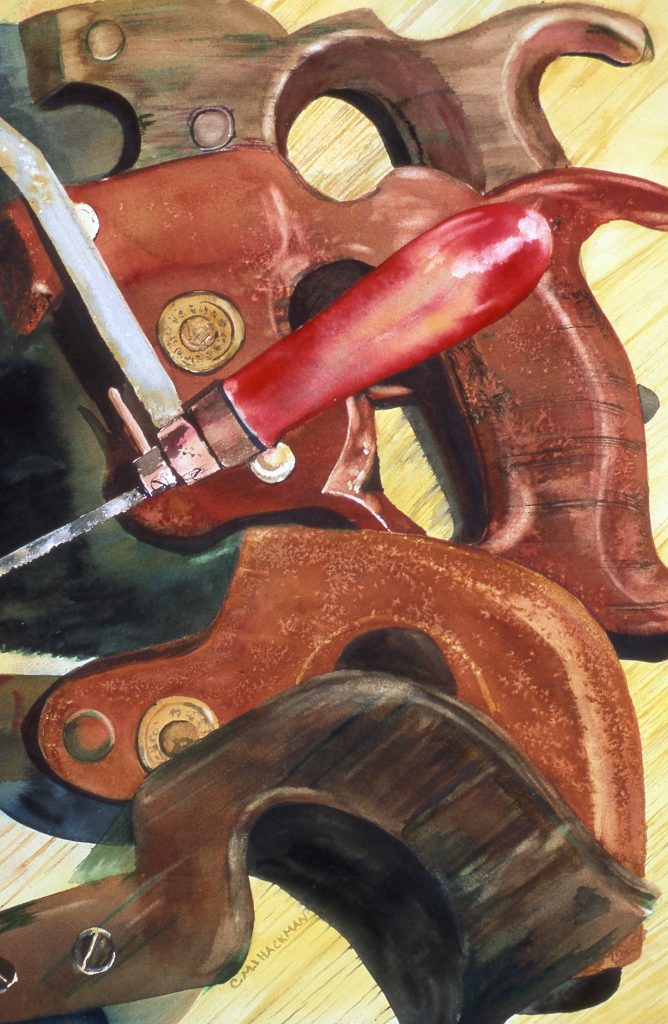 I was so interested in learning how to use these tools that I enrolled in technical drawing classes in high school. I had to get special recommendations from my guidance counselor and art teacher because these classes were not open to women. As a freshman art student at Syracuse University, I was eligible to apply to the Syracuse University Industrial Design program (SUID). My great attraction to the Industrial Design program was its ready access to a woodworking and metal shop.

The shops were used to fabricate the mock-ups of our product designs. One way or another, I was determined to become a skilled designer and fabricator. During the years I spent studying at SUID, I began to accumulate my own collection of hand tools. Despite his reluctance to allow me access to his prized tool collection, my father was proud of my accomplishments as an industrial designer.

While writing this article, I asked my sisters, Nan and Naomi, if they had the same attraction to the tool collection that I felt. Naomi responded, “As a child, I would always see my father using multiple tools for projects around the house. He often included me as an observer, but I never had the chance to actually use the tools. Then, once I reached higher grades in school, and they offered ‘shop’ as a class, it was never offered to the girls, especially if they were planning to go to college. I look back now and wish that I could have learned all of those skills when I was younger. Now, I dream of being a carpenter’s apprentice!”

My other sister, Nan, had a deep attraction to another piece of equipment in our basement. We had an old White brand factory sewing machine from our mother’s parents, who owned a dress manufacturing company. She, too, needed to acquire special permission from the school district to take sewing in high school, because it was not part of the college-bound curriculum. Nan became a skilled tailor, published two books on altering and mending garments, and started her own specialty clothing company. She currently designs and creates almost all of her work garments. Nan feels that everyone (even all of those college-bound girls who were not allowed to take home economics in high school) should learn basic mending skills and intends to teach them! 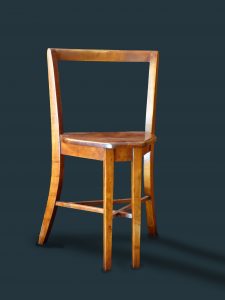 A few years after I married an apartment-dwelling city boy, we purchased a house. My trousseau, which included an ample collection of tools that could be used to fix up the house, enhanced our wedded bliss. We both learned skills to assist with home repair.

My father passed away in May 1993, our childhood home was sold, and Naomi and I divided up the tools. Some of the tools are lovingly displayed, hung on my studio wall. As I write this essay, my husband is using several tools in the very next room to replace a piece of damaged drywall.

Over the years, I’ve come to realize that the objects I treasure the most are the utilitarian items that bear the patina of years of use. Each one of the items in my collection served a purpose and, in many cases, was part of an ongoing creative endeavor.

I am so proud that my son Joel is carrying on the family tradition as a maker.  He is a skilled woodworker, machinist, designer, and fabricator. My great-grandfather’s treasured tools are slowly making their way into Joel’s toolbox. I asked Joel about his feeling towards the keepsake tools. He responded, “I grew up in a world of paintings on the wall of our house, and assumed this was normal, only to learn that not everybody’s mother is an accomplished artist. The paintings I was most drawn to from a young age were the ‘Keepsake’ series, which includes all of my great-great-grandfather’s tools. This foreshadowed a great life-long attraction to the warm tones of wood and metal patina. 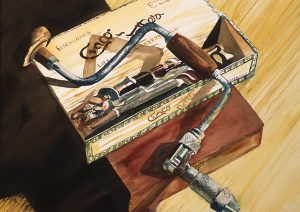 “I played many sports in high school, but the only one at which I excelled was sailing. I began to volunteer every morning at a summer sailing camp, where I learned to fix 30-year-old fiberglass boats, wooden daggerboards, rudders, torn sails, and broken spars. This fixation on handwork lay dormant until after college when my roommate, Michael, engaged me in the pastime of fine woodworking.

“Michael had been scavenging quality hardwood shipping pallets from his Ph.D. laboratory and hoarding the de-nailed boards underneath his bed. He also built a small hand tool woodworking shop in a utility closet. I invited Michael to start woodworking next to me in my welding and metal shop. Eventually, Michael dragged his grandfather’s wood lathe out of a garage in Pittsburgh, PA, down to our shop in Florida. After learning to wood-turn, I had fully caught the woodworking bug again.

“Fueled by an endless supply of urban lumber from a tree service run by our other best friend, Steven, we accelerated forward with our desire to run a real woodshop. I soon began collecting old heavy-duty woodworking machines and inviting other young makers with a passion for old machinery to join our shop. 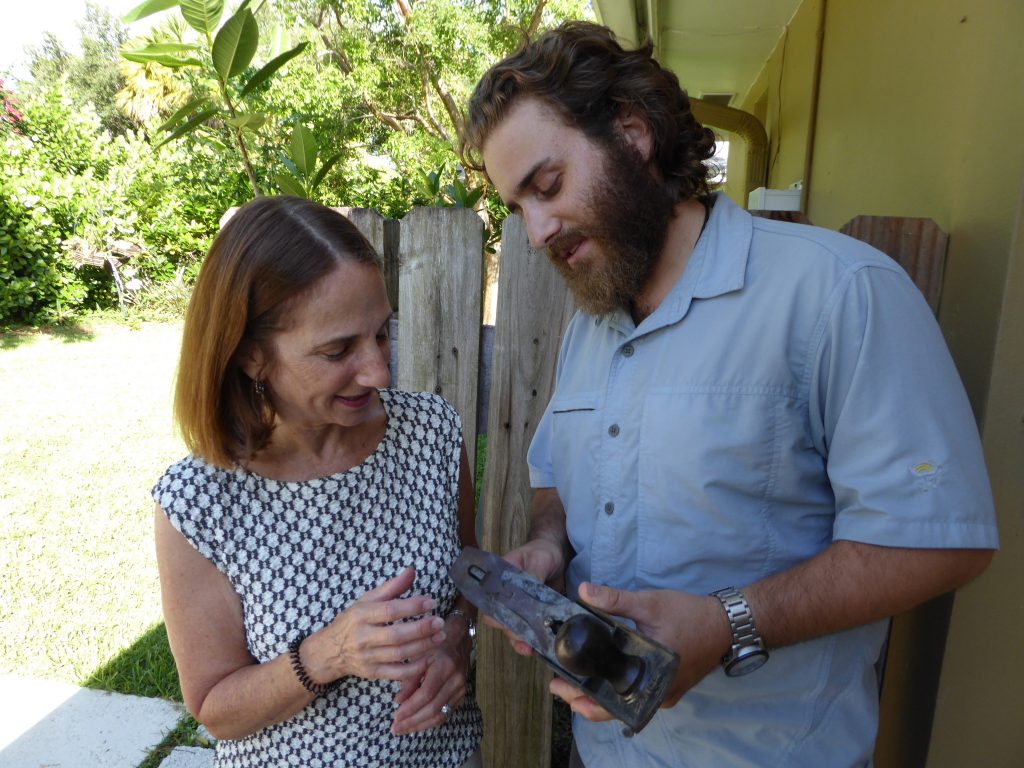 Caren and her son Joel discussing one of the legacy tools.

“As a machinist, I specialize in high precision metalwork. This skill is useful for making furniture and sculpture and refurbishing old machinery. I truly believe that the ability to make is programmed into our DNA, yet it is not taught or fostered in schools with college-geared curriculum. It is a central part of our evolution as humans. It is obvious now to me that it runs in my blood, but that took years for me to realize. I’d like to start up a program for young people that will teach them about fabrication, design, and classical technologies such as woodwork, welding, blacksmithing, machining, silversmithing, and textiles. It’s incredibly important to me to pass on this long love of tools and making to the next generation of makers and builders.”

This piece was originally published at www.carenhackman.com