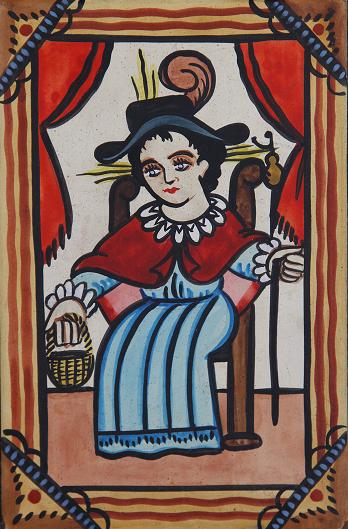 Charles Carrillo has blended craft, conservation, and innovation throughout his career as a santero, a carver and painter of images of saints.

This Spring, CERF+ created alternate guidelines to address the unique ways in which folk and traditional artists work. We asked Barry Bergey, CERF+ board member and former Director of Folk & Traditional Arts at the National Endowment for the Arts to share his insights about these artists.

Folk and traditional artists are sometimes so deeply embedded in their community that both their skills and their products, while recognized by their neighbors, go largely unnoticed and under-appreciated by the broader population. I had the opportunity to learn about and interact with many stellar traditional artists in my role at the NEA for over 30 years. Here’s what may be unique about Folk and Traditional Artists.

The work of folk and traditional artists is rooted in and reflective of a particular aesthetic tradition as defined by geography, language, religion, occupation, or cultural heritage. Usually the skills and cultural knowledge involved in the making of traditional crafts is learned informally, not in school, but at the knee of a family member or master practitioner.

2. MANY DON’T SELF-IDENTIFY AS ARTISTS

Most folk and traditional artists don’t refer to themselves as artists, but rather prefer to be known simply by the craft they practice – potter, woodcarver, quilter, weaver, regalia maker, or ironworker.

3. MANY DON’T PARTICIPATE IN THE MARKETPLACE

Folk and traditional artists often do not see marketing as a primary concern and in some cultural settings they may give their creations away to family members or community residents.  For them, “professionalism” isn’t necessarily defined by formal training or by display of their work  in galleries or participation in craft shows.  Mastery  may be defined by the length of practice and depth of cultural knowledge rather than income.  As Passamaquoddy basket maker and 2012 NEA National Heritage Fellow Molly Neptune Parker says: “It is the year-in, year-out practice that makes the artist out of the craft.”

4. THEY NEED FUNDING TO DO THEIR WORK LIKE ALL ARTISTS DO

While many artists have access to business training and are getting more astute at finding and completing grants, some folk and traditional artists may have limited access to the internet, as well as limited experience with “grantspeak” and grant application forms. Requirements such as providing a resume detailing formal education and professional experience might be challenging for traditional artists and may deter their interest in pursuing open opportunities

5. THEY’RE IN YOUR NEIGHBORHOOD

Carriers of cultural tradition are a part of every community.  Master craft artists may be situated  along known tourist destinations like the Pottery Highway near Seagrove, North Carolina, or in more remote locations like Gee’s Bend, Alabama, population under 300, but home to a thriving community of quilters.  Supporting folk and traditional artists strengthens community and assures a degree of cultural and aesthetic democracy.

This is one of those art forms you cannot separate from the people.  We write our own history by what we say and the art we do. ~ Charlie Carrillo

Most state arts agencies employ or collaborate with folk and traditional arts specialists and those programs serve as good resources for learning about traditional artists within a particular region.  Other great sources of information on the national level, in addition to CERF+ are: the National Endowment for the Arts, the Center for Folklife and Cultural Heritage at the Smithsonian Institution, the American Folklife Center at the Library of Congress, the American Folklore Society, and the National Council for the Traditional Arts