Defying Darkness: The Need for Creative and Cultural First Responders by Barry Bergey 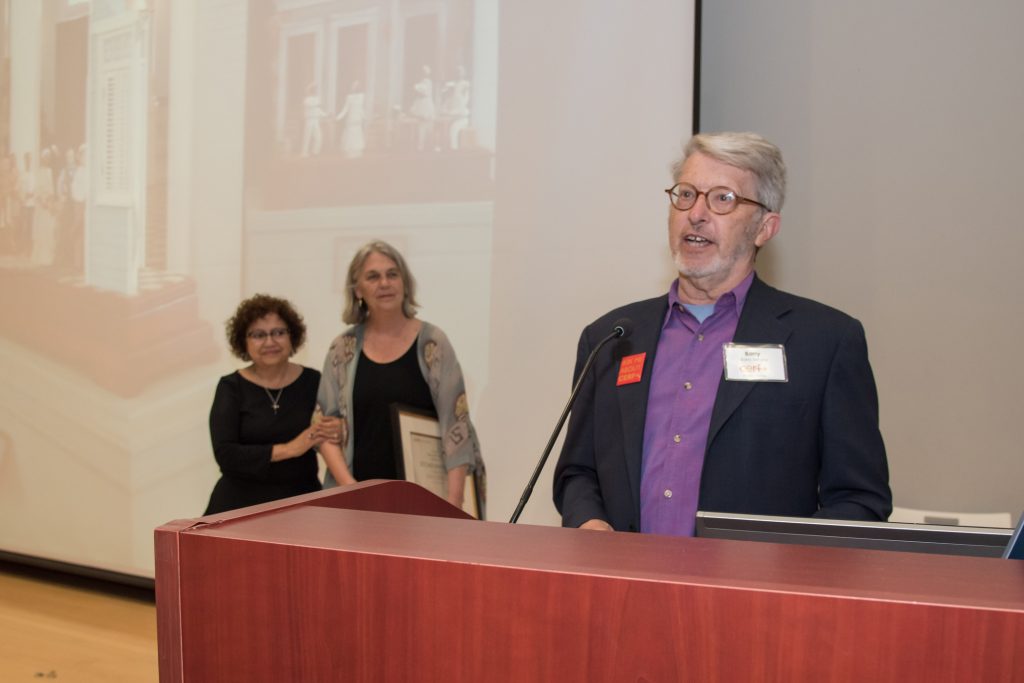 This year the CERF+ Board of Directors held our annual spring meeting in San Juan, Puerto Rico, from March 20 – 24. The Board chose to meet there to provide us with more opportunities to deeply engage with and understand the culture, community, and needs of artists with whom we have been working closely since Hurricane Maria devastated the island in 2017. During our stay we met with many of the individuals who received our assistance, witnessed first-hand the positive impact CERF+ has had on Puerto Rican artists, and experienced the vibrant community of artisans on an island that is still in a state of recovery. 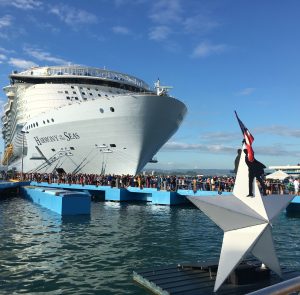 In some ways, San Juan is getting back to normal after the hurricane. Cruise ships are visiting, street festivals are occurring, and people are visiting markets. As the CERF+ Board was meeting at the Museo de Arte de Puerto Rico, we could hear the sounds of a large festival taking place across the street that featured Yo-Yo Ma and José Andrés’ World Central Kitchen. Despite these promising signs, we were constantly reminded that tourism is not the cure for all ills and that the average cruise visitor only spends $60 on the island. There is no doubt that progress has been made, but many, especially in the more rural areas are still struggling and need additional assistance.

Display of crafts at the Museo de Arte de Ponce, including a rooster carving by Emilio Rosado and a cuatro, a uniquely shaped 10-string guitar that has become known as the national instrument of Puerto Rico, made by Julio Negrón-Rivera.

The week was a whirlwind of non-stop activity. We visited museums, galleries, art storage, archives and conservation facilities, studios and workshops. We met with ceramicists, woodworkers, artisans, arts activists, directors of various museums and organizations, educators, local business owners, philanthropists, journalists, and government representatives. The artist-led panels, presentations, and conversations were wide-ranging and helped illuminate many of the challenges and opportunities facing the people of Puerto Rico. 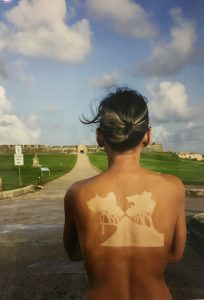 An image from Norma Vila’s A Metaphor Against Oblivion

A small exhibition that made a strong impression on me was Norma Vila’s A Metaphor Against Oblivion. The exhibit was installed at a gallery and consisted of nine photographs and several sculptures. Vila’s work focuses on the ways that unchecked development and environmental degradation alter the physical and cultural landscape of our memory. Using a stencil to form a tanned image on peoples’ backs, she depicts a scene that no longer exists. She then photographs these models in the exact location where the stenciled image had been previously located. “For this project, I am working with the representation of the metaphor ‘the skin of memory,’” says Vila. “Everything we have seen marks us, and many times when passing by some place, it is inevitable to remember that place as it was before… And that absent landscape is impregnated in us, it is a mark and a metaphor against oblivion.” Throughout our time in Puerto Rico artists and artisans were reminding us of that which was both seen and unseen, felt and forgotten, in the lives of the island’s residents. 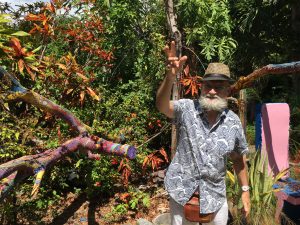 Antonio Martorell in his backyard in Ponce, Puerto Rico

Martorell’s resiliency and optimism made a lasting impression on me. When the trees in his garden were knocked down by Hurricane Maria, he responded by simply picking up a paintbrush and transforming them into colorful creature-like works of art. “We lost a forest, gained a zoo,” he said as he pointed towards the trees. Antonio described this process as taking the concept of disgrace, and discarding the “dis,” so that the artwork becomes grace.

A series of Martorell’s graphic works entitled Loas, are also featured in Puerto Rico: Defying Darkness, a major exhibition at 561 Arts in Albuquerque, New Mexico. Loas explores themes of Afro-Latin identity and colonialism and is a celebration of the rich artistic traditions and history of Puerto Rico. “Defying darkness is now a full-time job,” Martorell said. “Now all Puerto Ricans are artists because they have had to respond to disaster and be creative, and learn to improvise in the process.”

I walked away from the visit with a greater understanding and appreciation of the fact that in recovery both money and morale matter. Dollars and development provided by philanthropists and administrators furnish the mechanism for rebuilding, but the hearts and hands of the artists supply the reason and will to rebuild. Above all else, my time in Puerto Rico opened my eyes to the fact that that there is a real need for both creative first responders and cultural first responders.

Creative first responders, such as the artists in Puerto Rico, have addressed the emergency in several ways. Some have used their expressive work to engage with the political and social issues exposed by their encounter with disaster. Other artists have served their communities by continuing to create as they did before, sometimes in the toughest of circumstances. These artists have used their creativity – working with wood, clay, fiber and other media; performing music, dance, and theater; collaborating with and mentoring young people – as a part of the healing process.

Cultural first responders, the non-governmental organizations (NGO’s) such as Puerto Rican based Beta-Local, national artists’ service organizations such as CERF+, and various foundations and businesses on and off the island, have been able to support individual artists and artisans; sponsor festivals, craft fairs, and exhibitions; and shore up the not-for-profit arts infrastructure, including museums, presenting organizations, and artist collectives. On both fronts, there is still much left to do, but our experience in Puerto Rico provides evidence that artists and their advocates are central to the process of recovery.